Is Your Demodicosis Knowledge a Bit (C)rusty?

Dr. Allison Kirby shares the changes over the past 6 years 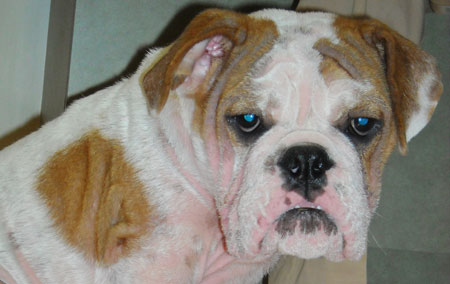 How much has changed in the treatment of demodicosis since Veterinary Dermatology published clinical practice guidelines in 2011?1 According to CVC educator Allison Kirby, DVM, DACVD, a lot.

Demodex Species Details
Demodex species, a follicular mite, is considered normal microfauna in dogs. A T lymphocyte defect specific for Demodex species mites in the skin’s immune system is what allows the mites to proliferate in the hair follicles and cause signs of disease.

Because Demodex species is transmitted from mother to pup through nursing, puppies born by caesarean section that do not nurse will not get the mite.
Juvenile onset of demodicosis usually develops when the puppy is between 3 and 18 months of age. Genetics may play a role in these cases as certain breeds appear to be predisposed. Any kind of stress, such as malnutrition, anesthesia and estrus, can cause juvenile-onset cases to worsen. And any other concurrent endoparasitism will make it more difficult for juvenile-onset puppies to clear the mites on their own.
LOCALIZED VS. GENERALIZED
According to Dr. Kirby, when a patient has only a few (less than six) areas of alopecia and scaling and when mites have been discovered via skin scraping, it’s called localized demodicosis. But when a patient has many localized lesions or either an entire body region or two or more feet that are involved, it’s considered to be generalized.

Dr. Kirby typically classifies adult-onset demodicosis as occurring in dogs that are 4 years and older. In these cases, she looks for underlying causes for immunosuppression, particularly Cushing’s disease, hypothyroidism, diabetes, chemotherapy or any type of neoplasia. Adult-onset demodicosis has also been seen in dogs treated with corticosteroids, oclacitinib (Apoquel—Zoetis) and cyclosporine (Atopica—Elanco).
Even though you won’t find an underlying cause in half of the adult cases you see, Dr. Kirby says it’s still a good idea to screen for a cause of immunodepression in an older dog presenting with diffuse or generalized demodicosis that isn’t receiving any medications that can predispose them to the condition (e.g. corticosteroids).

MITE MORPHOLOGY
There are three types of Demodex mite: Demodex canis, Demodex cornei short-bodied mite (which some people think is just a variant of D. canis) and Demodex injai, which is a long-bodied mite that tends to be dorsally distributed, says Dr. Kirby. Current research suggests that all three may be different strains of the same species, and beyond academic interest, the mites are all treated the same way. 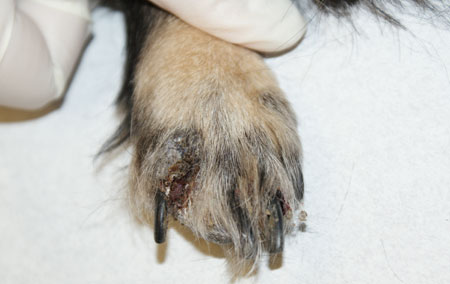 The Mark of the Mite
The clinical signs of demodicosis are varied. See lesions causing hair loss, erythema, crusting, and swelling on the face and paws of puppies? Scrape! See some of the more severe clinical signs, such as draining tracts, furunculosis, ulcerations or severe pyoderma? Scrape! See blackheads on the paws? Scrape! Follicular casting? Scrape! Itchiness? Scrape! Dorsally distributed greasiness on a Westie or other terrier? Scrape! (Demodex injai causes greasiness. Who knew?)

Diagnosing Demodicosis
Skin scraping is still the easiest, quickest and cheapest diagnostic test available. Scrape three to five 1-cm sites in different locations, and always include the face and the feet, even if you don’t see any lesions. Perfectly normal-looking skin can be harboring mites. Avoid scraping ulcerated areas. Aim for crusted, papular or pustular areas instead and scrape until you get some capillary ooze (hopefully a sign you’ve gone deep enough). Dr. Kirby also recommends squeezing the skin to help increase your yield and trimming long-haired dogs in the areas you want to scrape. To save time, Dr. Kirby puts all scrapes from all locations on the same slide to save time. If Demodex species mites show up on the slide, she can go back and separate the locations, if necessary.


CLIENT-FRIENDLY SCRAPES
You can use scalpel blades for the skin scrapes, but if you want to be more client-friendly, try a scraper spatula. They are cheap and may be more palatable to squeamish clients.

For animals with lesions around the eyes and those that are particularly fractious or wiggly, Dr. Kirby offers two alternatives: trichograms and tape preps. When performing the former, she plucks at least 20 hairs from a location, grasping the hairs by their roots to avoid breakage. For tape preps, Kirby has found success with acetate tape and performs 10 strippings per area. She mixes the sample with mineral oil and uses 4x or 10x magnification to best visualize mites. Dr. Kirby recommends lowering and partially closing the microscope’s condenser to lower the contrast and better see organisms.

When looking at the slides, Dr. Kirby records the numbers of mites, the life stages present (e.g. eggs, larvae, nymphs, adults) and whether they are dead or alive. (Hint: If the legs on the little “cigars” are wiggling, they’re alive.)

While skin scrapes, trichograms and tape preps are diagnostic on many dogs, some breeds can present more of a diagnostic challenge, Dr. Kirby says. Demodex species can be hard to find on Old English sheepdogs, and shar-peis with pododermatitis can have notoriously thick, scarred skin that refuses to give up a single mite. For these animals, and for animals in which treatment fails, Dr. Kirby recommends performing skin biopsies. Give the laboratory a leg up by writing “negative serial skin scrapes” in the history. 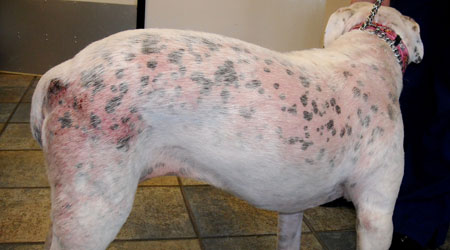 Demodicosis Drugs: The Usual Suspects
Amitraz (Mitaban—Zoetis) is still in use, but not without several health warnings. Amitraz is not recommended for pets or pet owners with diabetes, for Chihuahuas (sudden death reported) or for pets or pet owners who are currently receiving monoamine oxidase inhibitors. Diazepam and xylazine should not be given to dogs being treated with amitraz.

Oral ivermectin with dosing ramp up 300 to 600 µg/kg is another treatment option. Breeds carrying a mutation in their ABCV1 (formerly MDR-1) gene, such as collies, Shetland sheepdogs, Old English sheepdogs, Australian sheepdogs and their crossbreeds, should not be given ivermectin, as they are predisposed to neurologic side effects from the drug, including depression, seizures and ataxia. Reversible blindness was also noted in anecdotal reports. Dr. Kirby recommends teaching owners of pets being treated with ivermectin to watch for ataxia and changes in pupil size.

According to Dr. Kirby, oral moxidectin is still used and is comparable to ivermectin in efficacy. She also points to a 10% imidacloprid 2.5% moxidectin spot formulation available for extralabel usage in the United States that works well for juvenile or milder cases but isn’t as effective for more severe cases.

New Treatments on the Demodex Block

Afoxolaner (NexGard—Merial), fluralaner (Bravecto—Merck) and sarolaner (Simparica—Zoetis) are isoxazolines, a new class of insecticides that have demonstrated higher efficacy and safety in the treatment of Demodex species than any other drugs.

All three drugs were compared to a topical combination of 10% imidacloprid and 2.5% moxidectin (Advocate—Bayer) in overseas studies. Dogs treated with fluralaner demonstrated a 99.8% reduction in mites after a single administration at one month and a 100% reduction at day 56 and day 84.2 By comparison, Advocate given once a month for three months reduced mites by 98%, 96.5% and 94.7% at the same intervals2.

Dr. Kirby mentions one drawback with isoxazolines for future consideration: These drugs may mask dogs that are genetically predisposed to Demodex species proliferation, which will affect breeding lines.

For juvenile-onset localized demodicosis, the recommended treatment is still benign neglect, Dr. Kirby says. Set client expectations for resolution at one to three months. If the owners plan to breed their animals, she recommends using a flea treatment that has zero anti-mite action to ensure the demodicosis is self-resolving. If the owners are not planning on breeding their pets, they can start therapy if they wish.

For generalized or adult-onset demodicosis, Dr. Kirby recommends treating until you obtain three negative skin scrapes one month apart for the best chance of life-long remission. If Demodex species reoccurs in dogs that were previously in remission, check for concurrent disease or immunosuppressive medication.

Straightforward Enough, But Now For a Few Confounding Factors: References
Editor's note: The following sentence in the "Treament guidelines" section originally contained an error as shown (the crossed out text below). It has now been corrected. We regret any confusion this error may have caused.
If the owners plan to breed their animals, she recommends using a flea treatment that has zero anti-mite action (e.g., afoxolaner) to ensure the demodicosis is self-resolving.